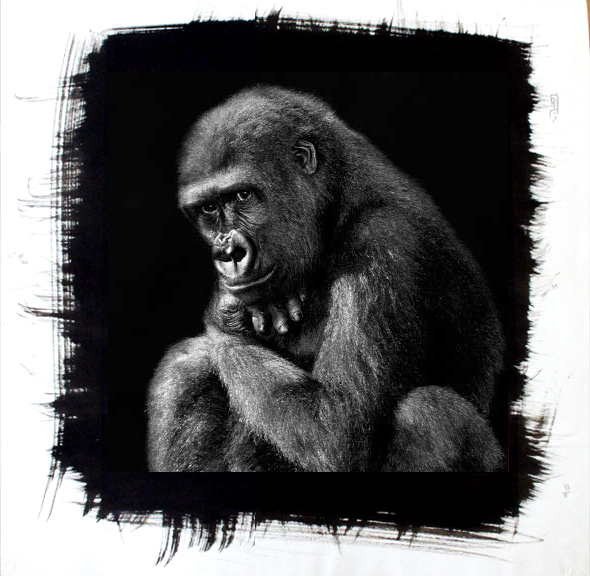 In Isabel Muñoz. Platinotypes, the last winner of the Spanish National Photography Award introduces to us a selection of her most representative series. Master of the frame and able to show the most beautiful spirit of what she portrays, each of her series is the result of the fieldwork and immersion in the cultures she explores. In N2 Gallery you can see the series Flamenco (1989), Tango (1989), Cuban Dance (1995), Turkish Wrestling (1996), Ethiopia (2002-2003), Dance Mevlevi (2011), Primates (2013-2015), Thaipusam (2016) and Metamorphosis (2016).

One of the specificities of this exhibition is the starring role of platinum. The technique of the platinotype used by the artist is a meticulous process that gives the images a unique tonal richness, texture and durability. All photos are large format contacts, made by Isabel directly from the negative. Isabel prepares the paper herself by applying a solution of platinum, as if they were paint strokes. Negatives, which must have the same size as the final photograph (60 x 80 cm), are placed in direct contact with paper already prepared under a large contact press. Thus it obtains monochrome copies by contact with materials sensitized with salts of platinum and iron, after a development with oxalato. Once the process is finished, the images are washed out and washed in large cells.

The platinotype, which is usually hidden behind the photo, reflects the gesture of the artist and is revealed here as the subject of the work itself, as well as the handmade papers chosen to give more materiality to photography. In addition to the durability and tonal richness that this technique ensures, the platinum-colored brushstroke, applied by the photographer herself on paper, makes each copy unique.

Isabel Muñoz is a renowned Barcelona photographer born in 1951 and living in Madrid. In 2016 she was awarded the National Photography Prize, this well-deserved award joins a long list of acknowledgments obtained in the course of her career, such as the World Press Photo International award in 1999 and 2004, the Community Photography Prize Madrid in 2006 or the PHotoEspaña Prize in 2009. She also received the Medal of Merit of the Fine Arts in 2009.

A professional recognition equally materialized by the presence of her work in different national and international collections, among which the National Museum of Reina Sofía Art in Madrid, Colectania de Barcelona, ​​Contemporary Art Museum in Houston, Maison Européenne de la Photographie of Paris and New Museum of Contemporary Art of New York.

The jury of the National Photography Award highlighted the professional career of Isabel Muñoz, in which she “combines social commitment with the pursuit of beauty, delving into themes such as body, ritual or cultural diversity “. They also underlined “the uniqueness of its use of a traditional technique applied to a contemporary language”. A formal prose before which Muñoz states: “My interest has always been the human being. The body is a pretext to talk about the human being, about us. Although in people there are dark areas, there is always a part of light, the human being can not live without hope “