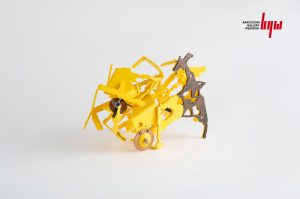 Opening: 09/26/2018
As part of the commemorative events of the 150th Anniversary of the Establishment of Diplomatic Relations between Japan and Spain, N2 Galería presents the work of Japanese artist Kenichiro Taniguchi at the Barcelona Gallery Weekend, the most important annual event for art lovers in Barcelona.
From its very beginning, the work of Ken’ichiro Taniguchi focuses on the exploration of the city as a unit of meaning. Just as each city has its own history, it also has its own form, which is the result of the conjunction between its natural geography and the human construction and manipulation over it. In his approach to the city, Taniguchi develops two types of studies: the Hecomi Study and the City Study.
The Hecomi Study focuses on the degradation that human beings and time produce on the city in the form of cracks and gaps in the streets or on the walls of buildings. Scars of the city apparently forgotten or even ignored that he selects meticulously to develop the conceptual part of his work. This Japanese artist manages to reincarnate these indentations giving them a different meaning and turning them into works of art. 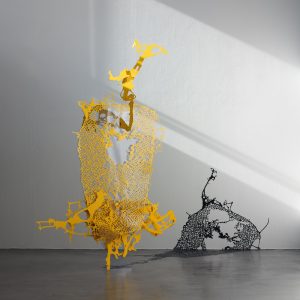 To achieve this, Ken’Ichiro traces the outline of the cracks in a transparent film, then shapes the drawing (in original size) on a plastic sheet and trims it. The next step is to make a series of cuts to the piece and then bend it and articulate it with a system of tiny hinges.
Over the years, this artist has developed Hecomi’s studies in different cities of Japan and Europe, with special emphasis on Barcelona and Berlin.
From a broader interpretation of the concept of Hecomi were born the City Studies, among which stand out his studies of Sapporo and London. In this exhibition he will present for the first time a large format sculpture from the City study of Barcelona.
In this case, the motives of the sculpture are created by plotting the aerial view of the whole city. First, it analyzes what would be the map of the city, delineates the coasts, rivers and green areas, to cut out the shapes of the surroundings and define the profile of it, conferring later on this space everything that defines the character and temperament of that city.
From these data, Taniguchi will create a free interpretation what will become a three-dimensional sculpture in PVC, articulated by folding and small hinges. On occasion, to highlight certain features in a more forceful way, complements the PVC with other materials, such as bronze.
The sculptures of Taniguchi are the result of a cartographic work that goes through different stages of transformation to represent the city or the crack in an objet d’art.

The sculptures of Kenichiro Taniguchi belong to important international collections such as The Museum Rotterdam, Bijzondere Collecties, CJIB, Miniature Museum of Contemporary Art, in Holland; DKV and Olor Visual Foundation, in Spain; Maeght Foundation in France; Javier Marín Foundation in Mexico; or Orange in Japan. Among his most recent large-scale public sculptures are the Hecomi Study for Kotoni-River in Sapporo and the Hecomi Study for CJIB # 21 in Leeuwarden, the Netherlands.
After this exhibition at N2 Gallery, he will travel to Amsterdam to prepare his solo show at the Rijksmuseum.