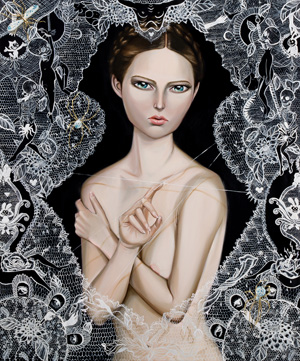 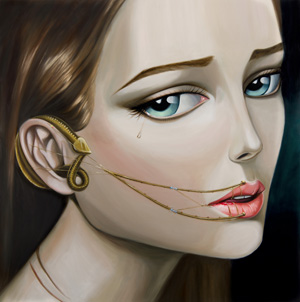 “Ingemisco, tamquam reus, culpa rubet vultus meus; supplicanti parce, Deus” (I sigh, like the guilty one, my face reddens in guilt; Spare the supplicating one, God) is the title of the new Crajes’ exhibition in Barcelona and comes from “Dies irae” poem .
Creating an atmosphere full of beautiful and disturbing images a gap is opened in the analysis of human nature and how it has been shaped with canons established in advance by individuals who are above them.
Taking as a begining point “Justine and Juliette” by Marques de Sade; Crajes creates a series of oils and inks where sexuality, paraphilias, perversity and pleasure are mixed until confusion reaching the question of human nature as being kind and gracious in itself.
Following the usual duality in their work, we can provide this new exhibition of a maturity already begun in their previous show “Virgins of Perverseness” in Manila.
The strength in detail, the technique and the execution are wrapped by a halo of sensuality, delicacy and perversion which are held without being disconnected.
For the first time in Barcelona, N2 Gallery is showing their oil on canvas works with their usual ink on paper pieces.
“Ingemisco , tamquam reus , guilt rubet vultus meus ; supplicanti parce, Deus is a different exhibition.” As they say after a long confinement time working on it: “It has been the most difficult exhibition that we have done so far, we have gone through many moods during it’s production and there is a lot of us in the pieces”
In another part of the poem you can read: “Death and nature will marvel, when the creature arises, to respond to the Judge.” The strong mystical and conceptual content in Crajes work is hidden, in this exhibition, by beautifully strong images.