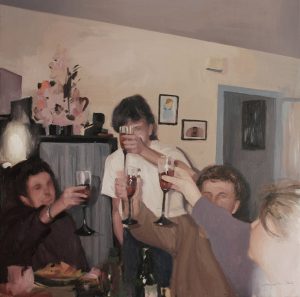 The new ways of relating to each other, introduced by the use of new technologies and social networks, have multiplied the perception of life’s transience.

AtEphemeral we present the latest studio work of three well-known Street-Artists: Roc Blackblock, Mohamed L’Ghacham and Rodrigo Romero. Three young artists who, from their personal approach, engage different aspects of the ephemeral nature of existence. Their vision is not that of someone who, from a mature age, looks back with nostalgia, but that of someone who becomes aware of the translation of the concept of programmed obsolescence to all areas of life.
Mohamed L’Ghacham, despite his youth, has a remarkable international projection. He is currently in Los Angeles preparing new works in an Artistic Residence for his first solo show in this city at the end of the year, while his work it’s being exhibited in New York at the Monike Art Fair by the Californian Gallery PDP. He has left murals in different locations in the United States, France, Morocco, Italy and Spain. In the works prepared for N2 focuses on everyday scenes, family snapshots and photo albums. Moments that often are erased by the memory and only overcome its ephemeral nature in the work of art. 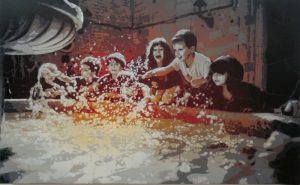 Roc Blackblock is known for its large format murals committed to social demands such as the recovery of the memory of the victims of different conflicts of the XXth century or the redignification of neighborhoods and collectives. In its proposal for N2, the concept of the exhibition is not only reflected in the theme of the works, but also in the technique used: experimenting for the first time with cutted japanese paper to make the template or stencil the final work. In the exhibition we can see works in different supports: paper, metal, canvas and recycled wood.

Rodrigo Romero, whose sculptures had been part of urban interventions and have won numerous awards, presents for this show small pairs of animals interacting with each other. The ephemeral, here, is the contact or the relationship, from the confrontation between hippos to the mother boar with her baby. In his sculptures the trace of graffiti is reflected in his particular way of applying paint to the pieces.